A beautiful Sunday here in North Carolina . . . bright blue skies, lots of sunshine, the temperature and humidity letting you know that summer is just about here. And it’s Father’s Day. I’ve wanted to do nothing but watch sappy movies and pull the covers over my head.  I haven’t even been able to post well wishes for those great Dad’s I know on my Facebook feed.

You see, five years ago this month, I lost my Dad.  We didn’t have that close bond like a lot of daughter’s do with their father’s. For most of my life it was a bit trying.  But as the years passed, he got older and sicker, and I spent lots of dollars and numerous hours in therapy, it became a good relationship because I worked at it.  As his mind was easing away and he was becoming less and less of the man he’d been, it made me realize how grateful I was he’d been my Dad.  He’d taught me so much more than he ever realized.

He wasn’t a stellar student, but he knew his way around the kitchen.  I owe my cooking skills to him.  As you might know, that’s my second favorite thing to be doing! But he also was a people person and could build and construct anything.  He built the house I grew up in and was always working on a project or two, whether for us or as a hired carpenter.  He was big, jovial, and swore like a sailor when something pissed him off.  (Did I get that from him too???) He had an attention to detail like I’ve known few to have, he instilled it in me.

As I sit here, wiping away my tears, I know he’d be so proud of me and how far I’ve come with my sewing skills. I think the biggest thing he taught me was to be confident and take pride in your work. He taught by example.  It’s not always easy, and mistakes happen, but knowing how to fix them and keeping your customers happy, even at a financial loss, is surly a key to success.

So although he’s not here for me to brag about my accolades of the past few months, I know he’s watching over me and cheering me on . . . You see, when I was seven years old, designing clothes for my paper dolls in the middle of the living room floor, I exclaimed to all, “I want to be a fashion designer when I grow up.”  That dream has never faltered or waned.  I’ve been designing clothes for women and sewing and constructing garments for more than 30 years, however this past spring I had an opportunity to create my first full collection. Actually, it was more a mini collection since there were only seven looks, but it was a daunting task to accomplish in two short months.

Sketch after sketch, ordering swatch after swatch, lying in bed nights envisioning how I saw it going down the runway.  Making final fabric decisions, selecting models, picking out hair styles and make up – have you ever watched Project Runway??  Yep, they make it look effortless but so much thought and energy goes into every detail.  I could hear Tim Gunn, ” . . . but is it cohesive?”  And lest I forget, the numerous hours of stitching and fittings.  To me, it all had to be absolutely perfect, that’s what Dad had taught me! It is my work ethic.

In the end, it was not perfect.  There were things I wanted to change, a nip here, a tuck there, hooks and eyes I wanted to add, but these were things the audience didn’t know and couldn’t see.  Whether or not it was perfect, it was mine, I owned it, and I am so very proud and pleased with my accomplishments.  I know Dad would be too!! 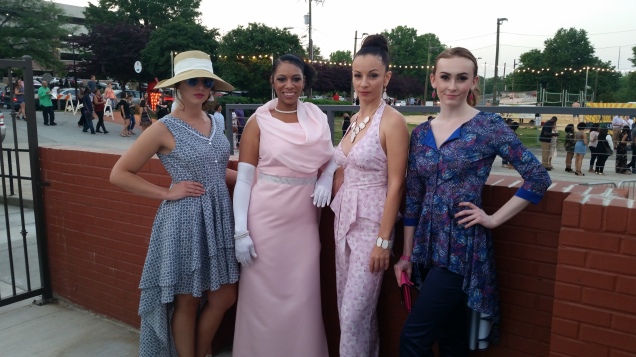 I regret my Dad never got to meet Carl and won’t be there to give me away next year at our wedding.  But he knew I was in a relationship and happy, and that means a lot to me! But as we’re in the hubbub of wedding planning, thoughts of him constantly go through my mind.  He would have liked Carl, a lot!  With a cocktail in hand, here’s a toast to Dad . . . I miss you and I love you and I know you’re partying away waiting for us to join you. But while you’re waiting,  I’ll be creating my second collection and showing it in August . . . Yikes, just another two months away!  But that’s okay, after going through it once, I know I’ve got this one in the bag!!

2 thoughts on “The Lessons Dad Taught Me”